In this short post, we'll explore what one has to do in order to build out a system that uses non-autoincrementing primary keys. Why would we want to do this?

Whether an internal or public facing, let's consider URL like https://example.com/things/12345 and what qualities it has:

Considering this, we may consider moving away from database assigned autoincrementing IDs. And for most developers, the first non-autoinc kind of identifier that comes to mind is a UUID (sometimes a GUID).

One approach we may consider is to augment records with a UUID. The approach of augmentation means you may have both an id column and a uuid column in a record. Your foreign keys still are mapped to the unsigned integer id columns, but your uuid is what you may use when exposing the records as resources on a website or in a API.

A natural alternative is using UUID's in the database as the primary keys themselves. This also means you're also using them as foreign keys in related tables. We won't go into the specifics, but there is much discussion of the pros/cons of such an approach:

An alternative to UUIDs that I like to use are ULIDs https://github.com/ulid/spec. There are a couple of advantages to using ULIDs:

If you are building an app that has a database, and you're not housing millions and millions of rows but maybe tens or hundreds of thousands, ULIDs are a good choice as they have negligable performance issues (when inserting or used for foreign keys) and offer the right balance of features when using them for their random and sequential (for database indexing purposes) characteristics. If you wanted more details and discussion, here are a few links I found:

To use ULIDs in Laravel, php more specifically, we need to either write a generator or use a 3rd party library (I use this one https://github.com/robinvdvleuten/php-ulid.) While the implementation is trivial enough, I've found there exists a good library that works and is maintained, so let's install that:

Then, let's build a migration, it will look something like this in the up method:

Next, we need to build a Trait that will enable our models to create ULIDs.

Now, our Widget model can consume this concern / trait:

Out of the box, Laravel Nova assumes primary keys are going to be created with $table->id() in a migration. This is an important detail only with regards to Nova's built-in change tracking table action_events. So, instead of the action_events table making references to models that are normally unsigned big integers, we have to make it so referenced models are tracked with character size 26 columns. 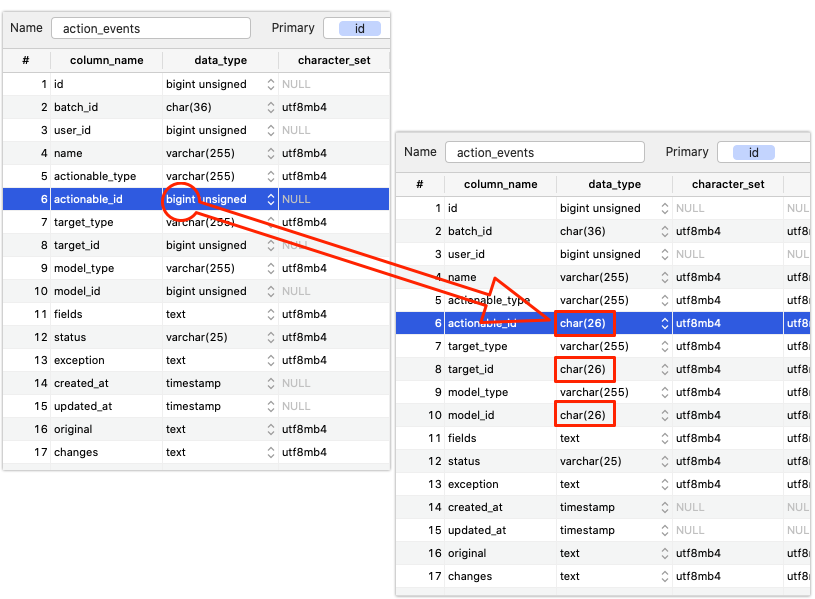 To achieve this change, we'll have to publish the Nova migration, so we can change it:

And that's it. Finally, we can create models that use a ULID and Laravel Nova will not complain: